Airport rail link is the fastest way to reach the Pendulum Hotel and the meeting venue, with most services taking less than 20 minutes. Direct services run from the Airport to both the main terminus at Manchester Piccadilly and Manchester Oxford Road, both located equal distance from the Meeting venue and Pendulum Hotel.

You will find the rail link at Manchester Airport by following signs from Arrivals to ‘The Station’ (this is the name for the Airport’s combined train, bus and coach station, serving all three terminals).

Journey times vary from 13 minutes (non-stop) to 25 minutes. Piccadilly services depart at approximately 10-minute intervals until 10pm, thereafter the train services are less frequent. If you plan to arrive after 10pm check train services. The last train usually leaves around 1am.

As of August 2015, a single (one-way) ticket from Manchester Airport to Piccadilly or Oxford Road costs £4.90 during peak travel hours or £4.20 off-peak.  Cash as well as most credit cards are accepted. The Pendulum Hotel is walking distance from both Oxford Road and Piccadilly train stations (see: map).

A car journey to most city-centre locations will take around 25 to 45 minutes depending on the time you arrive, and is likely to cost between £20 and £35. The train is probably preferable unless you have mobility difficulties or heavy bags. (Please note that we cannot reimburse the costs of taxi journeys unless by prior arrangement.)

Manchester Airport offers a minicab booking service on arrival at every terminal. You can hire a black cab straight away from the rank outside the terminal building. You will need to have cash. Private hires are generally cheaper but you may have to wait for your car.

The number 43 bus is a 24-hour service running directly from the airport to a range of city-center locations. Few travelers use it for this journey, as it is much slower than the train (around 65 minutes) and only slightly cheaper. However, if you feel like a good Asian meal on the way, the bus goes through the South Asian district of Rusholme, where the Curry Mile (a long stretch of South Asian restaurants and cafes) is located.

from London or other regional airports

Manchester is well-connected to other regional transport hubs by train (main station Manchester Piccadilly; Manchester Oxford Rd is also walking distance from the hotel) and coach.  Detailed instructions on travel from London airports are given below; if arriving at another regional airport, check local train or coach connections to Manchester and see maps for directions to the hotel.

London to manchester By train – from euston train station

The standard off-peak return fare from Euston to Manchester is £81.60. Off-peak journeys for London Euston to Manchester Piccadilly include trains leaving between 09:26am-3.00pm and after 6:45pm).  Peak-time travel is considerably more expensive, with a return ticket costing £329.  Tickets can be bought more cheaply by booking ahead, but advance tickets (peak and off-peak) are non-refundable and valid only for the particular train journey on the specified date and time; if you miss your train you will need to buy a new ticket.

Tickets can be booked online at http://www.virgintrains.co.uk or http://www.thetrainline.com.  To collect your pre-booked tickets at the station, find ticket collecting machines; you will need: a) the credit card you made the purchase with and, b) the reservation number you will receive by email after your purchase.  Tickets can also be bought on the spot from the machines using credit card.

The easiest way to travel within London is via the Tube (metro). Single tube journeys (including interchange between lines) cost £4.80 to £6 depending on distance travelled. A Zone 1-6 day travelcard (valid for unlimited use of all bus, metro and overground rail journeys on the day) costs £12 (off-peak, after 9.45am) or £17 (all day). Tickets can be bought from machines at the station using cash or credit card.

If making multiple journeys on different days it may be cheaper and easier to buy an Oyster card (£5 for the card plus top-up amount) as these offer considerable savings on single and day tickets.  For more information on Oyster fares.

The Tube runs directly from Heathrow Airport: take Piccadilly Line (dark blue) to Green Park, then Victoria Line (light blue) to Euston. Alternatively, take the Piccadilly Line to Kings Cross St. Pancras and walk to Euston (about ten minutes). Due to planned Tube (the metro) strikes, please check whether your journey could be affected. The approximate journey time is 1 hour and a single ticket costs £6.

Alternatively, the Heathrow Express train service connects Heathrow with Paddington train station, from where you can take the Circle (yellow) or Hammersmith & City (pink) Tube lines to Euston Square, which is a one-block walk from Euston station.  Tickets cost £21.50 or £35 return and can be bought online or at the station using cash or credit card.  The journey takes 15-20 minutes and trains depart four times an hour.

The Gatwick Express to London Victoria takes 30 minutes and costs £17.50 for a single and £31 for anytime return. Booking online is slightly cheaper. See timetable:  4 services an hour, for late and early arrivals and specific timetable.

EasyBus provides a low-cost frequent airport transfer service from Gatwick. Journey typically takes less than 2h. Buses depart every 30 minutes at peak times and run from 4am until 1am. EasyBus operate services to/from both North and South terminals London Victoria Coach Station. £3.95 one way, £7.90 return ticket. The coach station is a short walk away from Victoria train and metro station.

If you are traveling from Gatwick on Gatwick Express check how your journey might be affected by improvement works: Some improvement works are scheduled for the 5th and 6th of September 2015 resulting in changes in departure times.

From Victoria you can get to Euston train station on Victoria line (light blue). Allow 30-45 minutes.

Frequent train services operate between Luton Airport and King’s Cross St. Pancras International train station (£14). You can book online. A shuttle bus (10 minutes journey time) operates between the terminal buildings and Luton Airport Parkway train station. When booking train tickets, chose Luton Airport as a departure or destination point; the ticket will then include both train and the shuttle journey. Alternatively, you can purchase a separate shuttle ticket at a price of £1.60 single, £2.70 Standard Open Return. Note that purchasing the shuttle ticket at arrival is cash only.

To get from King’s Cross St. Pancras International to Euston train station take Victoria or Northern line (one stop). Alternatively, take a 10-minute walk as the stations are 600 meters apart.

By coach – from victoria coach station

National Express coach service offers an alternative for London-Manchester travel. Total journey times between London Airports and Manchester fall between 6-8 hours and cost £25-£45 one way. Typically you will need to change at Victoria Coach Station and arrive at Manchester Coach Station (see: map below). Coaches tend to leave every 30min-1h from Luton, Heathrow and Gatwick, for details see website.

Rooms have been booked at Pendulum Hotel, a part of Manchester Conference Centre, which is located within walking distance from Oxford Road station and Piccadilly Station (about 10-minute walk). For further details see the Pendulum Hotel website or call the hotel at 0161 955 8000. The hotel is a short walk from the meeting venue. 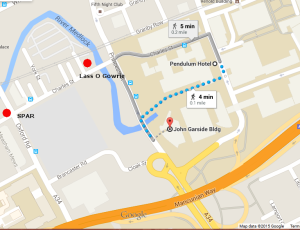 The Hinxton Group meeting will take place at the Manchester Institute for Biotechnology, located in the John Garside Building on the Sackville Street campus of The University of Manchester. The venue is a short walk (<10 minutes) from Oxford Road and Manchester Piccadilly train stations and is located next to the Pendulum Hotel.

Access to MIB. The MIB is located in a swipe card-access building. You will need to sign in at the reception to get inside; there will be a list of names for the Hinxton Group meeting at the reception desk.

A detailed programme for the meeting will be available on the website and at the event. For delegates arriving ahead of time, there will be an informal mixer event with drinks and nibbles at the Manchester Institute for Biotechnology (MIB) in John Garside Building on Wed 2 September at 5pm.

Sessions on the following days will begin at 9am and will finish at 5.30pm on Thursday and 4.30pm on Friday.

Venue: The ‘eduroam’ network is available in most University venues, for those with institutional access. For others, guest logins for the University of Manchester wireless network will be available at the meeting.

General: ‘The Cloud’ free wireless network is available in many venues across Manchester. An email address is required to register.

Meals: Your hotel booking includes a buffet breakfast (7am-10am). Lunch on Thursday and Friday will be served at the meeting venue. For dinner on Thursday we will make group reservations at a few different restaurants and sign-up sheets will circulate during the meeting for you to select your preferred option. We can reimburse up to £20 per person for the cost of dinner – please keep your receipts.

Local cafés & restaurants:  There are a number of restaurants located close to the hotl, including EastZEast, Zouk (Indian), Bouzouki By Night (Greek), Samsi, Umami (Far Eastern), Don Giovannis (Italian). For Far Eastern food, Chinatown is a 5-10 minute walk; the famous Curry Mile is a short bus or taxi ride (<£10) away. Oxford Road and the city centre offer a wide choice of other restaurants.

Miscellaneous: A nearby Spar convenience store located on 2-4 Oxford Road is open 24/7 (see local area map) and there are larger supermarkets at Piccadilly train station.

ATMs. On your way: cash machines will be located at the airport and Piccadilly Station. Closer to venue: ATM on the corner of Oxford Road and Charles Street (HSBC Bank), HSBC on the corner of Princess Street and Whitworth Street.

Local pubs: A charming local pub, Lass O’Gowrie is located on Charles Street, just around the corner; there are more pubs on Princess Street and Oxford Road within a short walking distance. Worth mentioning among conversation-friendly places are the Deaf Institute and Sandbar located on Grosvenor Street and the Palace Hotel on Oxford Road.